Just a not very original rant about stereotypes 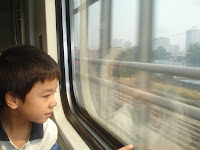 I get tired of hearing Chinese people are like this or that – they are aggressive and selfish, they are kind and giving and hard-working. Surely they are both those things, and more, as are all people groups in the world.

Let me illustrate with a story that just happened to me. I decided to take my three kids to the Olympic Forest Park by subway. So we didn’t go the most efficient route and we spent longer traveling than at the park. But that’s another story. As we got on the first subway train, the seats were all taken but I was fine standing with Joshua (3) for just a few stops. Still, a lady got up to give Joshua her seat, and before I even realized that she had, a young man sat down in the seat, apparently to be next to his girlfriend. The woman started berating him, gently but firmly, but he just stared at her and didn’t budge.

I was shocked and honestly speechless trying to process it. I felt so bad for this woman and regret that I didn’t yell at him myself or get out my camera and ask him again. Sure you can’t force people to give up their seat but to take someone else’s that they were giving up for a child is beyond disgraceful.

I tell this story to show an example of someone kind and thoughtful and someone who is a complete jerk. And they are both Chinese. In fact, by the time she’d given up and stood by the door, some other men gave up their seats for all of us. And for the rest of our journey on all but one train people moved for us.

Their father said he would have basically beat the guy up if he had been there. I said you can't do that or you will make yourself more of an ass than he was. And in fact there was a newspaper article a few days later about a man who did just that and was arrested. And in fact, public opinion was in favor of the man who didn't give up his seat for a woman with an infant (he had a health reason apparently). Yes, you can't make people, but communicate people and be courteous when you can.

At work, when breakfast is delivered (yes we get meals of sorts delivered), there are what I call vultures just waiting to take most of it and certainly the best of it. There can be such a culture of me first here that at times I want to slug people myself. But then others of my immediate colleagues will themselves haul some food away and offer me some. They don't like this behavior either. 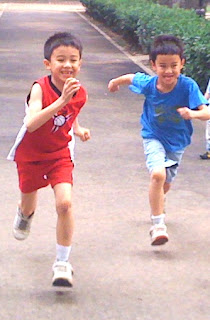 I admit with some shame that when my twins were born, for the first months all I could think about was how long it would be until they turned 18 and left for college. I didn’t realize that in fact once the “blur years” were over, it would get fun much faster.

Now they are turning 7 and, like every parent when a birthday comes around, I wonder how it passed so quickly. How the nursing and bottle feeding turned into eating sub sandwiches. How the diaper changing turned into locking the bathroom door to do their business. How the tottering turned into dreams of flying. How the scribbles turned into Chinese and English words

I think too of the (positive) things that haven’t changed. The laughs. The smiles. The need for mama. The dirty knees. The spaghetti, and chocolate, faces. Ethan the adrenaline junkie and artist with a love of drawing and dancing and a stubborn streak I don’t know where he got. Isaac the fearless sports player so eager to please and to be a big kid.

Suddenly Seven. And too Soon Seventeen I fear.
Posted by Jenny at 6:20 AM No comments:

My Kids are Failing School (And I’m Proud of Them) 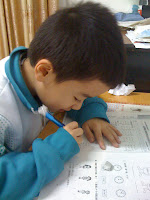 I suppose when my child brings home a 52 on a test, I should feel ashamed. I should push him to study more. I should devote more time to his education. I do do all those things, but mostly I feel proud.

You see, my twins are in a Chinese public school after living the first 5 years of their lives in the not speaking much Chinese besides farting words and watermelon. After a year of immersion in a nursery school, then pre-school, they entered primary school.

They’ve tolerated it very well, even thrived. Yet we constantly battle the high expectations that most parents have of their children – understandably in an overpopulated country. Fortunately for us, as bilingual kids with a passport, they will have plenty of opportunities in life so we can be relaxed.

Don't get me wrong, we do expect them to be constantly learning. So when they bring home a semester report card with a 100 in English, 92 in Math (amazing by itself considering the emphasis on math here and that problems require reading Chinese) and 50 in Chinese, I’m quite okay with that.
Posted by Jenny at 6:01 AM 3 comments: