A Tiger Mother in Action 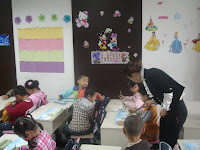 My husband, and sadly a room full of kids including my own, recently witnessed an event that makes Amy Chua seem more like a kitty mom.
There are three girls in my twins’ preschool class. Apparently two of them like to bully the other. This involves scratching her with pencils. Yes, that’s bad but so far no real injury at least. So…Jack goes to pick up our boys one day after one such incident happened. The bully’s mother arrived and was told what happened.
When her daughter denied it, she proceeded to yell and beat her quite violently. Other parents and staff intervened and sustained minor injuries. Some kids ran out crying because they were scared. Eventually the mother settled down and cried about how hard it was to control her daughter and her daughter’s lies.
Okay, so, so far this is something sad but it could happen anywhere. What happened next is what’s interesting. Virtually all the parents witnessing this event said, “Wow, I thought I was bad”.  And, in fact, in some ways sympathized with the mother. In other words, getting angry with their children is the norm. And not just the norm, but considered okay.
I don’t know if it’s that they don’t consider other methods effective. Maybe it’s the pressure of a one-child highly competitive society. I don’t think the level witnessed is the norm, and certainly many times I witness much patience and kindness. It’s not my culture or place to judge, though I wonder how this attitude that my husband sometimes has as well will play out as the boys start primary school.
Posted by Jenny at 6:34 PM No comments: